How welding and social media are the perfect couple 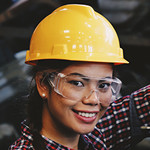